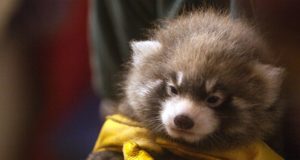 Within the Kovler Lion House, in a place hidden from the eyes of guests and caregivers alike, two new red panda cubs have been growing in their secluded den.

Nestled beneath their mother, Leafa, they started out small and largely helpless, dependent on mom for every aspect of their care. Born June 24, they lacked the species’ signature red fur at first, bearing only faint yellow markings. Until their first physical exams yesterday, the cubs’ growth was visible only on the camera installed in their den box, giving Lincoln Park Zoo’s animal-care experts a black-and-white view of the new animals as they nuzzled mom and called for milk.

The cubs at the Kovler Lion House—a male (above) and a female (below), as yet unnamed—are the second in two years for breeding pair Leafa and Phoenix, following male Clark and female Addison, now at San Diego Zoo and Northeastern Wisconsin Zoo respectively. Together, all the cubs highlight the strength of zoos’ collaborative efforts to keep their population sustainable over the long run.

Click here to read more about our adorable new neighbors.